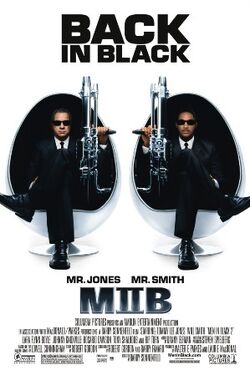 Men in Black II (styled as MIIB) is a sci-fi/action/comedy film, and the first sequel to Men in Black (film). It was directed by Barry Sonnenfeld, just like the original. All returning characters from the previous film reprised their roles, including Tommy Lee Jones as Agent K, Will Smith as Agent J, and Rip Torn as Zed. It was released on July 3, 2002 and made $441 million with a $140 million budget. It was followed by Men in Black III in 2012.

Five years after the events of Men in Black, Agent K (Tommy Lee Jones) has assumed civilian life as Kevin Brown, a postmaster of the small town of Truro, Massachusetts, while Agent J (Will Smith) continues to work for the MiB, the self-funded New York City-based agency that secretly monitors and regulates extraterrestrials' activity on Earth. J is largely without a partner, as his former partner Agent L (played by Linda Fiorentino in the original MiB movie) has returned to her former life as a deputy medical examiner ("because she wanted to go back to the morgue", as J explains to Chief Zed) and her successors had been expelled from the agency by J due to their unsuitability and lack of experience. Most recent is Agent T (Patrick Warburton), an ex-Marine (who spent exactly 5 months, 3 days and 9 hours in the service) who wept prior to being neuralyzed after a mission where they needed to extract Jeff, a large worm living in the New York subway system. While investigating a seemingly routine crime, J uncovers a diabolical plot by Serleena, a shapeshifting Kylothian queen who disguises herself as a lingerie model (Lara Flynn Boyle), but resembles a plant-like hydra in her own form. To stop her, J must convince K (who has no memory of his time spent with the MiB since J neuralyzed him in the previous movie, but is the only person alive who knows what is needed to defeat Serleena) to reunite with the MIB and find what Serleena is seeking before Earth is destroyed.

A large part of the plot centers on Agent J's relationship with Laura Vasquez (Rosario Dawson), a waitress at a SoHo pizzeria who witnesses Serleena trying to interrogate her boss about the location of the "Light of Zartha" before killing him (by snapping him in half, revealing that he was an alien as well). Rather than erase her memory according to MIB rules, J allows her to retain it. As Laura becomes increasingly involved in the battle between Serleena and the MIB, she comes to view Agent J as her protector, while he simultaneously falls in love with her. While J tries to deneuralyze K, Serleena and her henchman Scrad (Johnny Knoxville) launch an attack on MiB Headquarters resulting in a lock down; J and K escape after being flushed from the building. J then takes K to Jack Jeebs (Tony Shalhoub), who built an unofficial deneuralyzer. Although K eventually regains some of his memory, he reveals that he still has no recollection of the "Light of Zartha" (he neuralyzed himself) but left himself a series of clues in case he needed to remember. They start piecing together the clues , starting from a key in a pizzeria that leads to Grand Central Station. They find a race of minuscule extraterrestrials inside a storage locker who remind K of a card and a watch that counts until midnight. The card leads them in a videoshop owned by Norman (he was a superior officer in a morgue in the first film), where they find out that the card has reserved a film named "Mysteries in the History" about Episode 27, "Light of Zartha". When he watches the tape, K finally remembers his past with Serleena: 25 years ago in 1978, the Zarthan Queen Laurana arrived on Earth to try to hide the Light of Zartha, but the MiB refused to help due to their neutrality. Serleena arrived to steal the Light, but K activated the Zarthan ship and sent it away. Serleena, believing the Light is on board the ship, chased the ship, but not before fatally shooting Laurana. K then reveals that the ship was a decoy, and that the Light is still hidden on Earth.

Meanwhile, Serleena frees all of the MiB's high-security prisoners and uses them as henchmen. Believing that the Light is in Laura's bracelet, Serleena captures Laura and prepares to send her back to her homeworld. J and K counterattack MiB headquarters, defeat Serleena's henchmen, and rescue Laura. However, K warns them that if the Light is not taken off Earth and returned to Zartha, it will explode and destroy the planet. As they make their way to the departure point, Serleena gives chase but is eaten by Jeff, living in the New York subway system. When they reach the departure point, K reveals that Laura is Laurana's (and possibly K's) daughter and the actual Light of Zartha. To save Earth and Zartha, Laura reluctantly leaves Earth, much to J's dismay. Serleena returns to try to capture Laura again, but J and K manage to destroy her for good. To cover up the chaos caused by Serleena's rampage, K activates a giant neuralyzer hidden in the Statue of Liberty's torch. Now that Laura is gone, K and Chief Zed (the head of MIB) try to console J for his loss, but he answers that he needs no consolation and had accepted her departure without much sorrow.

Two other plot threads relate the interaction of J with Frank the Pug (an extraterrestrial refugee posing as a pug dog, who becomes J's partner early in the film, and who appeared in the original film) and J's madness when he discovers that K had been placed the race of extraterrestrials in J's locker, with J saying that the locker is encasing their whole world and that he should release them. K remarks, "You are still a rookie", and kicks open a forbidden door to reveal that they also happen to be on the other side of one of many lockers in an enormous alien version of Grand Central Terminal.

In the original ending, J accepts K's offer to see Laura again via a space pod, only to end up inside K's Grand Central Station locker and hailed by the C18 Locker Aliens that J met earlier. K closes the locker after telling J to have fun. The screen fades out after K closes it and J screams K's name in anger before the credits roll.

Before the summer blockbuster was released Infogrames and Melbourne House released a movie tie in game called Men in Black II: Alien Escape

Unlike the last film, MIB II received mixed reviews, only getting a 38% on Rotten Tomatoes, compared to the original's 91%. It also received a Metacritic score of 50. A. O. Scott of The New York Times said that, "Within the trivial, ingratiating scope of its ambition, though, the sequel is pleasant enough," and, noting the huge array of aliens designed by Rick Baker, said that the film "really belongs to Mr. Baker." A review in The Hindu called the film "worth viewing once." Another review from Digital Media FX magazine praised the spaceships as looking very realistic, but criticized many of the simpler visual effects such as the moving backgrounds composited behind the car windows using blue-screen (which it called a throwback to the special effects of earlier decades). In August 2002, Entertainment Weekly placed the Worm Guys among their list of the best CG characters, and said that the enlarged roles of both Frank the Pug and the Worm Guys in Men in Black II was beneficial for the "tiring franchise".

Before the release of the film, a novel was released. The book was aimed for young children, and was called Men in Black II: The Return of Jay and Kay.