Men in Black Wiki
Register
Don't have an account?
Sign In
Advertisement
in: Protected, Films, Men in Black Series,
and 2 more

“Let's rewrite history, shall we Kay?”

Men in Black 3 (styled as MIB3 and was originally titled Men in Black 3-D) is a American 3D science fiction action comedy spy film and the second sequel to Men in Black that was released May 25, 2012. Both Tommy Lee Jones and Will Smith reprise their roles as Agent K and Agent J. It released 10 years after Men in Black II was released. It is in 3D, a first for the film series. A marquee displays a tagline, "They're Back...In Time".

In 2012, an alien criminal named Boris the Animal, a Boglodite, escapes from a maximum-security prison on the Moon and arrives on Earth, bent on taking revenge on MiB Agent K, who shot off his left arm and captured him in 1969. He confronts K, who is with his partner Agent J, telling him he is "already dead".

J then returns to MiB Headquarters to peruse MiB's files and discovers that K was responsible not only for capturing Boris, but for deploying the "ArcNet", a shield that prevented the Boglodites from conquering Earth and caused their extinction.

That night, K calls J and they have a tense talk before J hangs up. Not too soon, K suddenly disappears because of Boris traveling back in time to kill the young Agent K. With history altered so that K is long-dead, J finds that only his memory has been unaffected, and no one from the Agency understands his obsession with K until Agent O, the new Chief after Zed's passing, deduces that there has been a fracture in the space-time continuum. With K out of the picture, the ArcNet was never deployed, and there is nothing to protect the present-day Earth from the Boglodite invasion, so J must travel back in time to stop Boris and save K.

J finds the person who gave Boris a Time-jump device and shows him the Boglodite invasion to enforce why saving K is important. J is given the other time device but before he travels back in time to 1969, he learns that he only recalls K because he was there.

After arriving in 1969, J goes to Coney Island, knowing from the Agency's records that in 1969, Boris will commit a murder there. He finds Boris, but is discovered and arrested by 1969 K, who takes him to MiB Headquarters and prepares to neuralyze him, but decides at the last minute to investigate J's claims that he has traveled from the future to protect him. K and J follow clues, leading them to a bowling alley, and then to The Factory, where they come across an alien named Griffin, who is in possession of the ArcNet. Griffin, who can see all possible future timelines and outcomes, senses Boris is coming and escapes, but not before promising to give them the ArcNet the next time they meet.

Boris later captures Griffin. J and K pursue and rescue Griffin, acquiring the ArcNet. 1969 Boris escapes and 2012 Boris arrives, and they team up.

His mission complete, J returns to 2012, where he finds a more cheerful K, and thanks him for being his surrogate father. Meanwhile, Griffin observes the moment and is briefly terrified when K almost forgets to tip a waitress, which he knows only occurs in timelines where an asteroid is on a collision course with Earth. However, K remembers and leaves a tip and the asteroid hits a satellite and is destroyed. Turning to the audience, Griffin smiles and remarks, "that was a close one."

In 2009, following the success of the first movie and it's sequel (which made a combined $1.03 billion!!), Sony began to work on the third film. By February 2011, the production of the film was pushed back another 2 months for the second time as a result of ongoing script issues. [1] When production resumed, the crew began shooting a film that didn't have an ending. Rick Baker said, “It was a crazy production. We had a writer actually on the soundstage writing the words moments before the guys had to say them. I don’t think that’s any way to make a movie. But I’ve seen a rough cut and I was actually shocked at how good it was.” [2] The budget of the film ended up reaching a whopping $215 million, which apparently increased as a result of Will Smith's personal demands, which included an over-sized trailer and the re-shooting of scenes. It's also been reported that Smith accidentally revealed that Lady Gaga will appear in the film. [3] After all of these problems, people have expressed concern. However, opinions of the film have turned good after previews and props seen at Comic-Con.

A video game based on the film, titled MIB: Alien Crisis, was released on May 22, 2012, published by Activision. 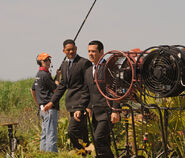 Will Smith and Josh Brolin on the set

Both Will Smith and Tommy Lee Jones have said that they would "consider" appearing in a Men in Black 4. Jones said it would be "easy to pick up where we left off. We know what we are doing, we know how to do it. It's just a hell of a lot of fun. In July 2012, Columbia chief executive Doug Belgrad said: "We're very pleased with the financial performance of Men in Black 3, and we believe it is an ongoing franchise. We're going to do [another one], but we don't have clarity yet on how it should be done." Barry Sonnenfeld said: "Will's kind of really smart, but as I said, kind of really annoying, too much energy. When he would get too rambunctious, I would tell him that for Men in Black 4, Will is out and [his son] Jaden Smith is in … if we continue on this path, it won't be released until 2032 but it will be damn good." Will Smith said that: "Jaden is already 14 years old, so he's at that mythological boys age, you know – it's time for his bro-mitzvah. So he's right at that place ... He's ready to test me so he can't come anywhere near my movies right now!"

An fourth film titled Men in Black International will be released in June 14, 2019.