View source
watch 02:29
'Men in Black: International' Trailer
Do you like this video?
Play Sound
MIB

“The Men in Black have always protected the Earth from the scum of the universe. In this new adventure, they tackle their biggest, most global threat to date: a mole in the Men in Black organization.” 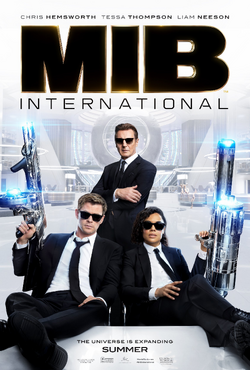 Men in Black International is a science-fiction action-comedy film directed by F. Gary Gray and written by Art Marcum and Matt Holloway. It is a spin-off from the Men in Black film series, which in turn was based on the Malibu/Marvel comics of the same name by Lowell Cunningham. The film stars Chris Hemsworth, Tessa Thompson, Rebecca Ferguson, Kumail Nanjiani, and Liam Neeson, along with Emma Thompson reprising her role as Agent O from Men in Black 3 and Tim Blaney as the voice actor for Frank the Pug, the Remoolian alien disguised as a dog from the first two films.

In 2016, Agent T and Agent H arrive at the Eiffel Tower, armed and ready to stop an attack that is about to happen. They come across a man proposing to his girlfriend, and explain that an alien race, The Hive, a parasitic race of aliens who survive by merging their DNA with those of the races whose home worlds they have conquered, are invading. The agents quickly neuralyze the two and telling the man to propose on their way down from the tower instead. The two agents get to some doors, holding their weapons at the ready just as some creature start to force their way through an into Earth.

In 1996 as a young girl, a man and his wife hear a noise coming from their backyard. The husband goes outside to investigate, but then comes running back into the house claiming that whatever was out there wasn't simply an animal, but some type of creature. Their daughter Molly Wright witnesses her parents being neuralyzed by agents of the Men in Black, while she helps an alien escape them. As it was assumed she was asleep at the time, she narrowly escaped the same fate.

23 years later, it seems that Molly is having difficulty finding employment with both the FBI and CIA, due to her strong belief in the existence of extraterrestrial beings and alien life, even being referred to as "delusional" by members of the two large intelligence-gathering organizations. She has a tracking system that gives her an alarm about an unknown object approaching the planet. She rushes out of her call center job, telling the guy next to her that "Jimmy is coming home to see his kids."

At home through what appears to be a computer program written by Molly that can patch into the Hubble space telescope and relay it's feed to her directly, Molly manages to track an unauthorized object entering Earth's orbit to an alien landing site a short distance away. She runs out of her apartment, grabbing her coat revealing a World News article showing that Jimmy is a green alien and he's sent a message to the mother of his triplets saying he is on his way back.

Molly takes a cab to the location that was indicated as the landing site, only to find nothing there. Turning around in puzzlement, she scares some birds and they fly behind her and disappear, causing her to accidentally discover the holographic force field used by the MiB to conceal scenes of alien activity from the public. She sets eyes on figures wearing the same sharp, pressed, black suits she remembered from her childhood, and surmised that they must be agents of the Men in Black. She quickly removes her outerwear, revealing a black skirt suit very like the ones sanctioned by the MiB, and follows them back to MiB headquarters, walking through the doors that are the entrance to the MiB's base of operations.

She walks by the doorman and Frank pretending to know about the organization and the full situation with Jimmy. As soon as she enters the elevator and the door closes, Frank asks the doorman if he's going to call in the intrusion or not. The doorman radio's in a Code Black. Molly gets to see a little of the MiB headquarters before the Code Black causes the elevator to suddenly lock and descend rapidly. After questioning about whom Molly is working for and finding out that that she is alone, Agent O makes it known that she is impressed by Molly's tenacity and cunning. Molly believes that she has proven herself by uncovering the secretive organization and has a willingness to join the group, stating that she has had no life outside of her search for the men who had neuralyzed her parents when she was a child. Agent O grants her the rank of "Probationary Agent", with the designation "M", and sends her to the London, England branch of the MiB, led by the former Agent, but now High T who is presently in charge of that branch.

Assigned to Agent H as his partner, her first task is to assist him in his meeting with Vungus the Ugly, a member of an alien royal family, at an alien nightclub. Vungus has a past history with Agent H, and can feel that he has changed. Unfortunately, this assignment does not go well when The Twins conduct an attack on Vungus, wounding him. Escaping to the street, a firefight ensues between the Agents and the Twins, who turn out to be invulnerable to the various firearms Agent H keeps in (or on) his vehicle. Slowly dying from his injuries, Vungus passes on a mysterious crystal to Agent M, claiming that he can no longer trust H because he has changed, before he dies. After being reprimanded by High T after the firefight destroys much of the city street and surrounding buildings, M and Agent C are instructed to begin an investigation into the attack, after M states that the culprit responsible for revealing the location of Vungus to the aliens who attacked must be an insider at the MiB.

It's concluded that The Twins are showing DNA traces of The Hive. M also learns that High T and Agent H were responsible for repelling an invasion of Earth by the Hive at the Eiffel Tower in France in 2016, and that Agent H's performance and dedication to the job has since been on a decline, with High T covering for him out of mutual respect.

Armed with this new information, Agent M is convinced by Agent H to follow up a lead in Marrakesh, where they encounter Pawny, who is the sole survivor of a race of aliens who were attacked and subsequently wiped out by the Hive. Shortly afterwards, the trio is attacked by agents of the MiB, led by an angry and suspicious Agent C, who had recovered video surveillance footage of Vungus passing the mysterious crystal to Agent M, and believes that she is the inside traitor who was involved in the attack on the alien royalty.

Escaping on a rocket-powered bike sourced by an alien contact of Agent H, and subsequently crashing into the desert after a heated chase through the streets and alleys of Marrakesh, the crystal is revealed to be a superweapon powered by a blue giant star. However, it is stolen by his contact and the trio learns that it was taken to an arms dealer by the name of Riza Stavros, a former "partner" of Agent H's. Attempting to infiltrate Stravos' island fortress, they are caught by Stravos and his bodyguard, however, the bodyguard recognizes Agent M as the child that helped him escape the agents of the MiB 23 years ago, and returns the favor by allowing them to leave while he keeps Stravos contained. Shortly afterwards, the group is attacked by The Twins yet again, and a brief fight ensues. High T and a several MiB agents arrive in the nick of time and kill the twins before they could get the upper hand.

Although the case seems to have come to a conclusion, it is then realized that The Twins could have potentially acquired the weapon to use in defense against the Hive, rather than for them. The evidence is further strengthened by the fact that only High T seemed to know that the twins contained traces of Hive DNA. Agent C concedes the fact that all evidence points to a massive deception of the London branch of the MiB by High T, and allows Agents M and H to follow him the the Eiffel Tower. On the elevator ride to the top of the Tower, with the help of Agent M, Agent H realizes that he cannot remember the events at the Eiffel Tower 3 years ago, in 2016. It is revealed that the Hive had "converted" High T into one of their race, neuralyzed Agent H to have him be considered the "hero", and concealed the events of that day.

The Hive-controlled High T activates a wormhole that has the potential to draw all of the Hive to Earth, however Agent H is able to interact with High T's true personality long enough to distract the aliens and allow Agent M to destroy the infestation, along with High T, using the crystal weapon.

With the truth behind High T and the Hive's concealment of the events at the Eiffel Tower and their control of the head agent, Agent O travels to Paris to debrief Agents M and H, where she appoints Agent M to a full member of the agency, and makes Agent H the probationary head of the London branch until a new permanent head can be found. Agent H is then left to wrap up the scene at the Tower with Agent C and the other Men in Black, whereas Agent M is re-assigned to New York.

In February 2018, it became known that Chris Hemsworth would appear in the film, and it would be directed by F. Gary Gray. The following month, Tessa Thompson was reported to have joined the cast. Then in May it was believed that Liam Neeson would star as the head of the UK branch of the agency, and several weeks later it was confirmed. The script was co-written by Art Marcum and Matt Holloway, and produced by Laurie MacDonald and Walter Parkes. In June, Kumail Nanjiani, Rafe Spall, and The Twins (Laurent and Larry Bourgeois) were also added to the cast. Steven Spielberg reprises his role as executive producer, who also has been in the first three MIB films.

Danny Elfman, famous for producing musical theme tunes for such well-known television shows as The Simpsons, and who also scored the first three Men in Black films, returned to compose the music for the film alongside Chris Bacon. 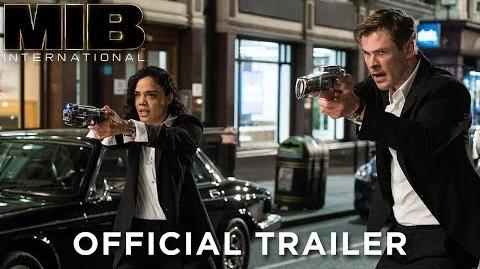 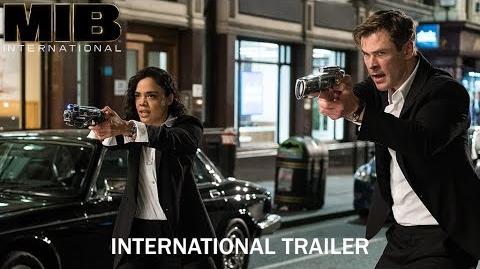