Men in Black Wiki
Register
Don't have an account?
Sign In
Advertisement
in: Bugs, Aliens, Villains,
and 8 more

Not to be confused with Edgar.

Films
Men in Black: The Series

“You ever pulled the wings off a fly? You care to see a fly get even?!”

—Edgar to Kay and Jay

Edgar the Bug (or just The Bug) is a Bug alien and the main antagonist of the first Men in Black film. His appearance is that of a giant cockroach though while on earth, he adopts the disguise of a human farmer. He hates it when any bug is killed (especially cockroaches). Edgar in human form and his animated series appearance are both portrayed by Vincent D'Onofrio.

Edgar's appearance is that of a 12 ft tall insect, complete with two antennae hanging over his head, six limbs, and fearsome set of razor-sharp fangs. While he primarily resembles a cockroach, his features also mimic those found on several other insects native to planet Earth: his body frame and eyes are comparable to those of a Praying Mantis while his mandibles resemble a mantis' forelegs; his hind legs resemble those of a cricket with functionality akin to those of a Grasshopper, and his Scorpion-like tail features a stinger similar to that of a Hornet.

While in the guise of Edgar, his appearance is ragged and poorly conceived as the skin around his face is noted to be considerably saggy and shapeless. Due to being concealed in dead flesh, his appearance becomes increasingly disheveled over time as the Edgar suit rapidly begins to rot, leaving sparse hair on the scalp and the tone of the skin and left eye severely discolored.

He is first alluded to by a Cephalapoid criminal that then-NYPD officer James Edwards had pursued, where he mentioned that he would kill him for the failure, and ominously warned that once he arrived, Earth is going to be destroyed before committing suicide.

In the beginning, the Bug crashes on Earth by flying saucer. He crashes on the truck of Edgar, an abusive farmer while he is yelling at his wife, Beatrice for having his dinner poorly made instead of having a steak. When Edgar goes out to investigate with his shotgun as Beatrice asks Edgar what on Earth is it and Edgar rudely orders Beatrice to get back in the house, the unseen insect demands Edgar to put down his gun, but Edgar refuses, threatening the bug instead. However, the bug grants his "proposal," reveals himself, and kills him by flaying him, eating his body (off-screen), and uses his skin as a disguise. He goes back inside the house where Edgar's verbally abused wife Beatrice awaited him. She asked him what happened, but the awkward alien instead asked for sugar water. She notes his "skin is hanging off his bones." Looking in a mirror, he agrees and pulls his face back past his skull, causing her to faint. The next morning, a bug extermination truck, ordered by Edgar when he was alive before then, arrives at the farm to exterminate some cockroaches in Edgar's barn. However, the bug arrives and is angered by his intentions. He kills the exterminator and steals his truck in his aid to hunt. His arrival also spooked several of the alien residents into trying to evacuate the planet, some even risking violation of going into places their alien licenses forbade them from accessing just to get away. Meanwhile, he searches and spots Gentle Rosenberg leaving his jewelry shop to meet with a fellow Arquillian at a local diner, where the Arquillian warns him of the bug. However, the bug already traps them before they can escape, and kills them by stabbing them in the neck with his sharp tail. Arquilian Galaxy. Throughout, he is chased by Kay and Jay of the MiB (who learned of his arrival after talking with an evacuating alien family who was illegally accessing the Manhattan area), who are always one step behind. Edgar finally gets the Galaxy and attempts to leave a hidden ship, also abducting Laurel (at the time a mortician) in order to deter pursuit, although he becomes more eager to kidnap her when she, in an attempt to convince him to let her go, implies that Earth will declare war in response due to her being its ruler, since it meant ensuring that he can feed his family's mouths. But the ship is shot down by Jay and Kay.

After the ship crashes, Edgar emerges and complying with J's demand to put his hands on his head, pulls his skin off, revealing his true self. He eats the agents' guns and Kay purposely gets eaten as well after warning Jay to make sure the Bug doesn't go on the second ship while he goes inside the Bug to find his gun. Jay is able to distract the Bug by throwing things at him, jumping on him, and stepping on cockroaches, and Kay is able to get his gun and blows the Bug in half from the inside.

They finally have the Galaxy, but half the Bug starts coming back behind them with the clear intent of trying to kill them in revenge, when Laurel, a morgue worker who was kidnapped by the bug, shoots the bug with J's gun just as it was about to chomp on J's head, finally killing him.

In "The Big Bad Bug Syndrome", a select few of Edgar's brothers appear, including his identical twin, Edwin. They attempt to capture Elle for their queen who desires revenge upon her for killing Edgar. Edgar is only seen in a flashback.

Years after Edgar's death, a painted portrait of him going up against Agent J and Agent K in 1997, that resulted in his defeat and death was hung at MIB's London branch in High T's office.

The "Edgar Bug" character was inspired by the insect-like aliens which are the central focus of the second issue of The Men in Black. Initially, the character was to be portrayed by practical effects via a full-scale animatronic puppet, designed by Rick Baker Studios. The appearance of the puppet differed greatly from the finalized look of the creature seen in the film. As such, the final battle in the film was originally intended to be much more low-key, which would have involved an exchange of witty banter between the villain and the protagonists with The Bug ultimately meeting his end upon being blasted away by the two agents. After initial shooting commenced on the scene, it was decided that the sequence felt way too anti-climactic, and a more action-oriented finale was quickly re-written. With the new fast-paced final fight, the original puppet was discarded in favor of a CGI creature. To accommodate the new scene, The Bug was redesigned; initially, the look of The Bug was conceived as something of a cross between a bipedal praying mantis and a cobra with a bird-like face. While being fundamentally the same concept as Baker's original design, the new look featured several aspects which were re-tooled. These changes included increasing the creature's size to be large enough to swallow a 6' human, restructuring the face to look more vicious and monstrous, including a pair of hanging antennae, and adding a second pair of legs. Due to the abrupt change, several promotional materials and tie-ins, such as action figures and the comic adaptation, all feature The Bug portrayed in his original design. Interestingly, the only piece of merchandise that managed to capture The Bug's new look was the Micro Machines mini figure, albeit while still retaining the cobra-like hood. As an Easter Egg, the opening credits of Men in Black: The Series feature a mugshot of the character's action figure in the MIB criminal line-up.

Keeping in line with the designs of the principal cast of MIB: The Series, the creative team deliberately chose not to have Edgar resemble the look of his on-screen counterpart. As such, The Bug's design in the cartoon took select aspects of the movie Edgar's design and amalgamated them with several unused elements from concept art for the film.

The Bug reacts to Jay squishing a cockroach

The Bug is eager to rip Jay apart

The Bug is about to finish off Jay and Kay

One of the Bug aliens from The Men in Black which served as the basis for the character of Edgar. 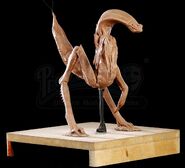 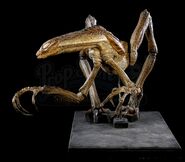 Animatronic head which would've been intended for use in close-up shots. 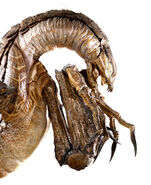 Side view of the discarded puppet.

The scanning maquette which was utilized to provide the base model for the CGI Edgar.

the ILM team closely studied Baker's practical props when coming up with the character's revised design.

Tie-Ins and Other Media

Edgar's appearance as seen in the comic book adaptation. 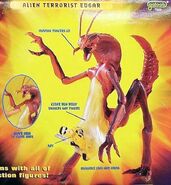 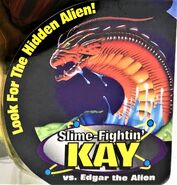 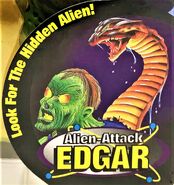 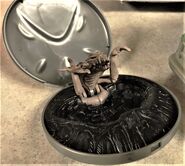 Edgar's design in Men in Black: The Series.

Cameo appearance of the "Alien Terrorist Edgar" figure seen in the opening of Men in Black: The Series. 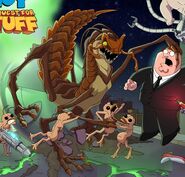 Edgar as he appears in the 2017 "Guys in Black" promotional event for the Family Guy: Quest for Stuff mobile app.