Men in Black Wiki
Register
Don't have an account?
Sign In
Advertisement
in: Aliens, Species, Bugs,
and 3 more

"Imagine a giant cockroach with unlimited strength, a massive inferiority complex, and a real short temper is tear-assing around Manhattan island in a brand new Edgar suit." -K, describing Bugs to J. agario

Orthopterous Exomorphs (or Bugs as they are commonly referred to by MIB personnel) are a belligerent race of insect-like aliens native to Hiveworld. A Bug serves as the main antagonist of the original film in which Edgar the Bug ventures to Earth in order to instigate a war over the Arquilian Galaxy. It is shown in the film that these Bugs share a kinship with insects native to Earth, particularly cockroaches. The Bugs also appear to have some sort of special connection to these insects, as they can feel pain whenever any insect within their range is killed.

As established in the first film, Bugs are a nightmarish interstellar species of arthropods which resemble monstrous, overgrown cockroaches. As such, standard physical attributes of Bugs are a slimy and hairy exoskeleton; six limbs, four of which sport prehensile taloned claws; a pair of lengthy antennae crowning the top head; a versatile tail armed with a lethal stinger at the tip; and a set of pincer-like mandibles which are capable of being retracted into the [Bug's] fanged maw.

Accounting for their body structure and large size is also a set of impressive superhuman abilities including crawling up walls, and heightened strength and leaping. As a defense mechanism, Bugs are capable of manipulating an adhesive, green phlegm-like substance from somewhere within their digestive tract, allowing them to rapidly seize objects or subdue enemies by entrapping them in it. Bugs also have an uncanny ability of compressing the majority of the density of their body mass, allowing them to fit inside spaces remarkably more compact than what their default size could allow. Alongside this, Bugs are also incredibly resilient to physical damage, being able to survive total separation from the entire lower half of their body, so long as their head remains intact. As such, these two attributes allow Bugs to survive any variety of cataclysm or altercation, resulting in them being extremely hard to kill.

However, despite being nearly invincible, a Bug's two fatal weaknesses are its relatively limited line of thought and its connection to Earth's smaller insects. It appears that Bugs do in fact share some form of evolutionary connection with earthly cockroaches as the Earth roaches seem to be heavily attracted to Bugs, usually flocking towards their alien relatives in hordes. In the event that a cockroach is killed within the presence of a Bug, the extraterrestrial insect will experience a painful somatic response; and while this sensation is largely incapable of neutralizing the creature, it is strong enough however, to dangerously rile a Bug's volatile temper. Due to their exceptionally vicious nature, Bugs are notorious for being one of the most feared alien races throughout the galaxy; so much so that even the stoic Kay expressed notable unease over the revelation of a Bug's presence in New York.

The non-canon comic Men in Black: Retribution, which serves as a direct sequel to the events of the first film, features the appearance of the Bugs' larval form. In this stage, Bugs possess a multi-legged grub-like appearance, complete with a pair of round compound eyes, a crude set of mandibles, and a circular mouth opening lined with six razor-sharp tusks. While technically being newborns, Bug larvae are are actually considerably larger than adult Bugs and extremely dangerous. It is shown that just one egg has the potential of spawning dozens of larvae with an exceptional burrowing capability.

In the animated series (which follows an alternate continuity from that of the films), Bugs are revealed to come in many shapes and sizes, and do not exclusively resemble cockroaches but rather a variety of insects and arachnids. Their home world is referred to by them as "The Hive" and at the apex of the Bug hierarchy sits The Queen: the supreme ruler and progenitor of the entire Bug race. As seen in the episode The Mine, Mine, Mine Syndrome, Bugs only ever mount an invasion upon an unsuspecting planet whenever The Queen is about to birth her newest brood, thus allowing her children to feed upon the planet's population and resources. It is shown that The Queen is capable of laying large quantities of eggs at a single time and requires excess amounts of sugar during this period. Bug hatchlings are relatively small in size and possess an identical appearance to each other, resembling that of a mite. In The "J" is for James Syndrome, it's revealed that Bugs are all interconnected through a hive mind system which roots back to The Queen. Upon the instance that The Queen is destroyed, all Bugs will immediately shut down and cease function. This could evidently offer an explanation to the phenomenon of the painful reactions Bugs experience whenever Earth insects are killed.

The Men in Black: Alien Attack ride at Universal Studios Florida (which can presumably be considered canon), features a Bug as the final alien which guests will encounter. Unlike the Bug seen in the film, the sheer size of this Bug is comparable to that of a city block. During the ride, the only visible portion of the Bug is its head, rupturing from out of the Manhattan streets. While the Bug's design is similar in appearance to that of the one in the film, this one is far more monstrous in appearance, sporting much more teeth as well as the addition of a second pair of eyes and a smaller head reminiscent of the larvae from MIB Retribution protruding from the center of it's face.

In the original film, Edgar the Bug comes to Earth looking for the Arquilian galaxy. He goes around using the human skin of a farmer named Edgar, and is able to get the galaxy near the end. However, Jay and Kay are able to shoot down his ship, in which the Bug reveals his true self after removing his skin disguise. After a struggle, Kay purposely gets eaten, but manages to find his gun and kills the Bug from the inside after Jay was able to distract the Bug by squishing several cockroaches. After this, Jay and Kay finally sit down covered in slime and recovering from their battle with the bug, but the bug starts crawling behind them, and just before it attempts to eat Jay and Kay and tries to get to the second ship, Laurel, a morgue worker whom the bug kidnapped, shoots the Bug by using Jay's gun which was dragged out of the bug's stomach. According to Edgar himself, there were at least 78 million Bugs, all of whom are members of his family.

The events of this comic take place several weeks following the conclusion of the first film. In the story, it is revealed that a part of Edgar's mission involved the implantation of an egg sac containing a brood of his offspring deep within the Earth's crust. Based upon the successful completion of Edgar's objective, the subsequent annihilation of Earth's inhabitants at the hands of the Arquillian Empire would ensure a planet-wide food supply for his brood. Upon Edgar's arrival to Earth, the Bug somehow managed to deposit his egg sac in a rural gulch outside of Tempe Arizona which happened to be conveniently located near the retired Kay's newfound place of residence. In the wake of the failure of Edgar's plan, several reports of murdered locals begin to surface and Jay and Elle are sent in to investigate which ultimately leads to them reuniting with Kay.

Men in Black: The Game

Bugs appear as enemies in the non-canon events of Men In Black: The Game. One Bug serves as the boss of the Amazon level where it is encountered within the depths of a Mayan pyramid which in actuality, is an ancient alien structure. Another Bug appears as a sub-boss before encountering the game's main villain, Skip Frales. Acting as one of Frales' henchmen, the Bug initially appears wearing a human disguise only to reveal it's true form upon receiving a few hits of damage.

In the animated spin-off, a Bug named "Geen" appears inThe Take No Prisoners Syndrome, escaping from MIB prison with the help of Dr. Lupo, though Geen and the other prisoners are arrested again. The Bugs come back to Earth in The Big Bad Bug Syndrome. Here, Edgar's identical brother, Edwin comes to Earth, sent by the Bug Queen to capture the agent who killed Edgar. Edwin then sets his sights upon Elle though not without competition as two more of his siblings, Mo and Dung, also vie for the Queen's reward. The Bugs return once again in The Mine, Mine, Mine Syndrome where the Queen of the Bugs herself comes to lay eggs, and makes a final assault in The "J" is for James Syndrome, where she is finally destroyed. One bug had a cameo in The Dog Eat Dog Syndrome where Frank, while locked in a pound truck, inquired of his species, briefly unveiled his true species to the dog. He was disguised in this instance as an old man.

In the second film, only a single Bug is seen. After getting his memory rebooted, Kay almost steps on a cockroach, but then decides not to. The roach then remarks "Damn decent of you". It is never made clear if this creature was truly a member of the Bug race as unlike the others, he does not exhibit any of the typical personality or vocal characteristics of a Bug. If such is the case though in-which the character is a Bug, this would explain Edgar's concern over the well being of earthly insects. Early in the film, Jay also refers to Jeff as being a "Bug in the [subway's] electrical system." While Jeff does bear resemblance to a Bug's grub-form, he is much more frequently referred to as a "worm" and later identified as a "unipod."

Promo for MIB: The Series featuring an early design concept for the Bugs. 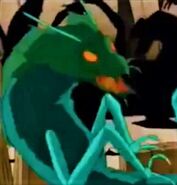 Jay being accosted by two Guardians.

A Bug from MIB: The Game.

Bugs as they appear in the MIB3 app.

The "Megabug" seen at the finale of MIB: Alien Attack.